Skip to content
Playing sports has always been my passion. Out of all, Football is the sport which I enjoy playing the most. Turf grounds are very famous in surat and football is a recognized sport in India and many people love to play this sport. hence, organizing a box football tournament on turf ground helped us attract more participants in which I donated all my profit to orphanage owned by my uncle. So organizing a 6 vs 6 football tournament on turf grounds, for two days, was the perfect CAS project with all three strands of CAS. Around 14 teams participated in our tournament.
The project covers all three strands “Creativity” “service” and “activity”
LO1
Throughout the project, I was able to identify the strengths and weaknesses of mine. My strengths were communication skills and management skills, as I persuaded many players to play the game and enjoy it also announcing in every class I communicated with the students. Me and my friends managed to get everything before expected time such as Turf for two whole days, trophy and referee for the matches which shows our management skills.weakness were that time management skills was not up to date as we planned the tournament will go on for 2 days 7 hours each day but it took 16 hours to complete the tournament.
L02
As previously said that time management skill was a challenging part as the tournament was 2 hours late which also shows that planning skills were also a bit weak in this process. The skills developed were communication skills, management skills, time management skills, planning skills this skill is enough to make any event a great success.
LO3
While usually, I am an organized person, organizing the tournament was a little difficult for me. It was difficult for me to initiate the CAS plan rather than planning it. It was easier to plan the project when compared to initiating it. It was easier to plan out where we wish to conduct this tournament and how what the format will be, however, it was quite difficult to manage the matches on the days of the tournament. During this project, I was able to discover that I am pretty good at conflict resolution. Maybe, it is a skill that I developed in me through the course of this project. According to me, as I was able to conduct this project successfully, even in the future I will be able to plan and initiate similar projects. This confidence that I have in myself will be very useful to me when I will be planning out bigger business projects in the future.
LO5
Working collaboratively was made the task easier because my friends and i share the same interests so it was much easier to manage this event. The task is divided which makes the work more easily and faster. The problems which faced were that as there is a team so there will be more inputs and ideas so eliminating point to come up with a new idea was a difficult task and one more difficulty was that there was a bit dispute with the teammate while making decisions, as a team decision making sometimes is tough.
LO6
Connecting to the global significance where I donated all my profit to my uncle’s orphanage as I am not in the need of money so I may donate it to the people who need it.
LO7
Any football match requires a referee, so for our tournament, we appointed official referees. Referee in a  football doesn’t only require knoledge about but also integrity and fairness.  It was very much necessary for us to be fair towards everyone during our tournament. We had two teams in our tournament which were of our closest friends still, we weren’t biased towards them. For us, showing integrity during our tournament was an aspect related to our ethics. After our tournament finished, our friends from the two teams showed a little disappointment towards us as they weren’t able to make it to the finals. However, we three were satisfied with that because we were fair enough and we let the skills of the teams decide the winners. 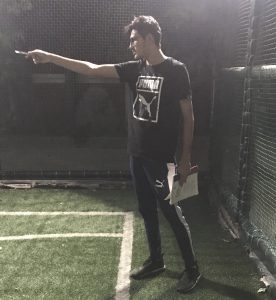