Basketball is a group activity in which two groups of five players, contradicting each other on a rectangular court, contend with the essential goal of shooting a b-ball through the protector’s circle while keeping the restricting group from shooting through their very own loop. I have started playing basketball before 6 months. I got selected in the school basketball team. We as a team worked very hard together to improve our individual skills as well as team understanding. We practised with full dedication in every PS slot and also came early in the morning for some days before the actual time to have an edge in our game.
My goals:-
-The first goal was to understand a proper game and know how to play
– I want to improve my nonverbal communication skills while playing the game.
– My main goal of playing basketball probably being tough while playing and I want to improve my offensive play.
-Improve my fitness.

LO 1
After playing for a few months I identified my weakness that I have to work upon my dribbling and have to learn skills to develop my game. I also have improved my shooting position as it is very important for scoring in the game.
The strength which I could identify while playing basketball is that I can run fast and I have a good jump which helped me to do defence. It is very vital to know the strength and the weakness of our self to achieve the goal easily and it would use less time to work upon it. The most challenging part which I felt is that applying the tricks on the court while playing the game. I have also done similar drills like this before which I felt comfortable while performing it. I overcome the challenges by trying my best while I am playing the game as said by a famous person ” Keeping trying one day you will get success in your life”.There were some skills which weren’t there in me like I didn’t have patience which is now getting built up slowly and gradually.

Since this was a long term movement, I needed to set my objectives to improve the game wherein I had the alternative to reflect back after each space with the goal that I know the territories I should work upon. As I progressed further in the game, I had the alternative to accomplish various objectives and increase new ones so my training was consistent. Continuously end, I planned to get the hang of controlling and driveby for improving the body control.

Despite the fact that being tiring and meticulous, playing b-ball has consistently been my obsession. In this way, I went to all my PS spaces consistently notwithstanding when I was lethargic, tired or had some other pending school work. At home, I woke up right on time for doing suffering activities which would support my stamina to enable me to play all the more proficiently in the game.

The basketball is a team game and unlike other games, you can’t perform well except if you have great coordination with your teammates. Being another understudy in this scholastic year, I didn’t have great coordination with my teammates, a large portion of whom are my seniors. In this way, I needed to work also to assemble compatibility with everybody, and I think I oversaw it entirely well to a degree it doesn’t hamper the exhibition. We won the competition.

During the matches, there are numerous players who purposely push and intentionally hurt great players from rival groups with the goal that they have better possibilities at winning. However, fowls are given yet that doesn’t hamper their game to that degree. Succeeding at the expense of damage and harming another person is extremely low according to me and I would never do that. I actualized every one of these morals while playing every one of my matches and it made me feel content glad that we won without cheating. 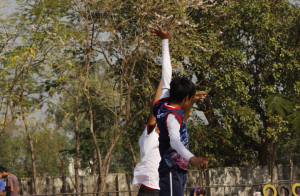