I was a part of a MUN called ‘The Mega Conference’ (Rangmanch). Where in I had participated as a delegate in the Counter-Terrorism Committee (CTC). There we were supposed to discuss issues related to terrorism, where each person was representing one country. It had lasted two days long from 4th to 5th August. The experience was new to me, as it was my first time attending any MUN. I was the delegate of Japan in this committee. It is being my first experience, the procedures were not known to me, so I was a bit nervous. As I started taking part in the decisions I had gained confidence in myself, and I was also able to learn all the procedures.

LO 1:- Identify your own strengths and develop areas for growth.

While attending MUN, I was able to find my own strengths and weaknesses. I found that my research skills were strong because on the first day of MUN, I got a different country than the one I was informed about. So, I had to do on the spot research, but still, I was able to find a sufficient amount of material. I found my weakness to be that I had become a bit nervous when I had to speak to represent my country, and because of that, I was not able to put forward my points clearly. When I got to know about my strength and weakness, I felt that I am informed about myself and now I could take advantage of opportunities and work on my weakness. And in the next MUN, I might feel more confident when I had worked on my weakness. If I work on my weakness then It could also help me to express myself in front of many people. And I and to sell, my ideas and I do not become nervous in front of many people then I could influence my audience, which would be beneficial for me and my business.

As our committee was a Counter Terrorism committee, we discussed the issues related to terrorism and terror funding. In today’s date terrorism has become a global issue, as many countries all over the world are facing this issue. The country I live in “India” has also become a victim of terrorist activities. By knowing about these global issues I feel connected to the current world. And MUN had given me a stage to express my feelings and give my perspective on the growing global issue of ‘Terrorism’.

While attending MUN I developed a few learner profiles, like I had become a good thinker because there was a lot of thought process required before making any point. And I had also become open-minded because I was able to consider everyone’s perspective. Before attending the MUN I had thought that it would not be very much interesting, but then after attending it, I got to know that I had got a sense of gaining knowledge about terrorism, and how it is treated globally. I feel happy and satisfied that I was able to express my feelings on the global issue, and that too in a very formal way. 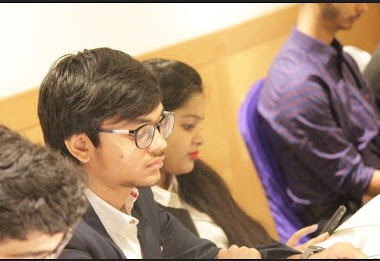