Monsoon Musings was a student led Poetry event wherein the school community (which included students, teachers, parents and grandparents) had an opportunity to share their thoughts and ideas creatively in form of poems and tiny tales with everyone in any language (Hindi, English or Gujarati) they were comfortable in. The event also introduced Seva Cafe wherein people can pay any amount they wish to for the food served to them, and Art Stalls that had various artworks displayed. These artworks were made by Senior school students themselves and could also be put on sale. All funds of Seva Cafe and Art stalls were generated for charity. The main aim of the event to bring back the lost glamour to literature and generated maximum funds for charity.

As I had volunteered for Karma Kitchen before, I knew that heading the Seva Cafe was my thing because I would passionately work towards its success. My instincts and my experience worked and I got selected as the Head of Department for Seva Cafe. I was fortunate enough to get a partner who was equally hardworking.

We started preparing for the event one month before the day of the event. During this month, I discovered some of my strengths and weaknesses which I eventually took up as challenges and tried to overcome them. My biggest strength was my calmness while dealing with my entire team. My partner herself was a little short tempered, but because I used to remain calm, she also worked on her nature and we could work smoothly together. Secondly, this also help me in team building. People would listen to my opinions or my instructions.

As a Head, it is very important to have good delegation skills. However, this was my weakness as I am not a perfectionist and so I end up taking up most of the responsibilities. I started working on this weakness with my partner’s help as soon I realised it was affecting speed of our work. We delegated work to our team members considering their strengths, weaknesses and preferences in order to bring out as much efficiency as possible.

Monsoon Musings was supposed to be hosted by the entire grade 11. And this resulted in Seva Cafe team being the largest team. At first, it seemed like a chaos. Managing and Leading a team of 25 people who were our grade mates was the biggest challenge I faced in the entire project.

Working collaboratively with such a large team was something I had never done before, and I built a lot of new skills such as tolerance, organisation and open-mindedness. As I was leading the team, I had to be prepared for facing and resolving conflicts between team members, or last minute crisis. And to limit the probability of such things happening, it was best to plan things well. Furthermore, working with the team also brought in lot of open-mindedness in me for listening to and trying out new ideas. This resulting in seva cafe turning out to be better than we and our teachers had originally expected.

One challenge that I faced while leading and working with my team was when we (me and my partner) were supposed to divide the entire team in sub groups as per their duties and the food items they were supposed to prepare. This division came with another challenge as everyone wanted to work with their friends. It was logistically very difficult to listen to their requests, however, we decided to consider these requests and tried our best to make groups in such a way that most people would be satisfied because by the end of it we didn’t want to upset our friends. And furthermore, we believed such a grouping would cause lesser conflicts and greater enthusiasm.

Another challenge I faced was while deciding the quantities of food items we would require for the event and thereby in deciding the quantity ingredients as we were aware of the number of participants but it was difficult to anticipate the amount of audience which was going to turn up for the event. As I don’t cook on a regular basis, I had never been in such a scenario before. So, I took take help from my teacher and my mother to rectify my quantities in order to make sure that we don’t run out of  food on the day.

As the Head of Department of Seva Cafe, a lot of planning had to be done for the event, from setting up the entire cafe, to food items, vessels, etc. I personally am an organised person and I also like to keep things around me organised, which makes me good at planning things. This planning helped us overcome a huge crisis. On the day of the event, some of my teammates forgot to get some ingredients. This caused panic amongst the entire team. However, I had already talked to the kitchen team of the school and requested them to provide us with ingredients that are available in the kitchen incase any such crisis occurs. The kitchen team was very supportive and I was happy to have resolved the crisis smoothly.

Being a part of Seva Cafe, our main ethic was to serve all our customers the right quality and quantity of food. In my opinion, we partially remained unethical to this ethic, in one situation. When we were serving food during the event, there were some children who asked for many servings of food. For about two or three servings, we served the quantity we had decided to serve everyone, but later, they kept on asking for more servings (technically they could) but didn’t donate any amount of money for charity. Our original aim was to collect as much amount for charity as possible. So, all the teammates decided to serve lesser portions so that we have more food left for the ones (teachers and parents) who would actually donate some amount. When I reflect upon this, it is a little saddening that we couldn’t be entirely ethical, but it still helped us achieve our aim, which by the end of it was for a good cause and not for our personal benefit.

This CAS experience is unforgettable as I feel proud that we as a grade pulled off the event so successfully. This event helped so many students and parents not only to present their creativity, but to appreciate others creativity as well. All of us did our work with all our efforts knowing that we are not going to gain anything monetarily, that inspired me the most. 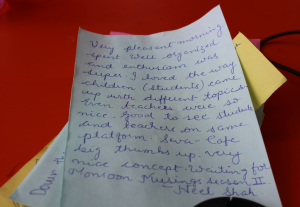 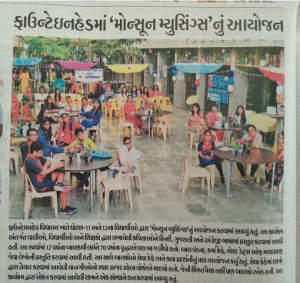