When I came to know that we going to Gir for our CAS trip I was very excited to go on this trip with my friends. The main motive of the trip was not for fun purpose but was to volunteer for a project of ‘Saving Lion by Covering well’ and gain experience of how to make the metal cover with different techniques like welding, cutting etc. We were further divided into 2 groups and we had to make 2 large grills. Once we covered the well we then went to meet the king of the jungle. This trip was full of adventure and experiencing new things. Going on a night trek in a jungle with full of a wild animal was simply amazing. More than 12-hour journey during the bus with friends was simply wondrous.

LO – 1 Identify own strengths and develop areas for growth

During the trip, I identify my strength and weakness. The trip made me realize the leadership skills that were hidden in me for a long time and I didn’t even realize it. As we were divided into two groups, I was one of the leaders leading a group. I divided work properly and also helped them when needed. Since we used to work all day long  and used to go on a trek during nights it used to become tiring and I used to lack stamina so during the trip I also realized the importance of perseverance in any complicated physically challenging upcoming tasks. So I learned and improved on  my stamina so that I won’t face such things in any further treks or places.

LO – 2 Demonstrate that challenges have been undertaken, developing new skills in the process

During this trip, I learned about manufacturing about the metal cover which we had to make to protect well. The process that was used up were welding, drilling, cutting etc through which we would make the metal cover. During this work I never knew how to do such things, the challenging part was using different and dangerous material. We were given leather gloves for cutting different glasses for welding. I didn’t have the dare to do things first so I took my time learned from my friends how they did before me and learned and then I implemented it which further resulted in the development of my skills.

LO – 4 Show commitment to and perseverance in CAS experiences

During the work was going I was feeling very tired and bored but since I was the leader I had to do certain things and I can’t just easily give up things. So I practiced my perseverance and had shown commitment to complete the task. As all my team member were also on me and I couldn’t have let them down.

Though we all divided our work into 2 groups and each had to make 1 metal cover. Working together was a great benefit since we were able to work faster and carefully also one thing that benefited a lot was the bond that we shared together as friends we knew who was better in what due to which the chances of fights decreased. Identifying the skills that we possessed and delegating work accordingly helped us to complete our task on time without any compromise.

Since these Asiatic Lions are now become endangered and are only seen in West India and Africa, they hold global significance. 250 lion have been dying in the past half-decade, and now it’s getting difficult to maintain their population. Hence, saving the lion has become a certain issue that you might have seen in every newspaper one or other day. The main goal/aim of the trip was making a metal cover to save the lion through falling into the well while they hunt in nights. Installing of these metal cover would have been definitely helpful for lions coming to extinct. At last, we had a small session with the experts over there, and we learned about how much important it is to save such animals.

LO – 7 Recognize and consider the ethics of choices and actions

Doing ethical work for wildlife conservation was a very important aspect. In order to make a positive impact on the endangered species and making decision-based on ethical ground, we, therefore, made a metal cover to protect the Asiatic Lions. Other than this we also came across — During the trip there thought in, the tent they provided us to use the air conditioners and sufficient lights. We all were given instruction to only use if we require it because we wanted to reduce the carbon footprint since we were surrounded in the jungle. And wasting up the resources was not ethical work to do. By becoming aware of such issues helped me to make more effective decision regarding caring for the environment after all it satisfies most of our needs. Thought on the first day i left my lights open when we went out to work, which didn’t really made me feel comfort, and later when we were taught about making efficient use of the resources provided. I used to immediately close the lights and air conditioner when it was not required. This also helped me in taking care of such resources at my home as well.

This adventurous trip made me develop the following learner profile attributes.

Caring – while helping each other over making the fence and making sure that no one is hurt since i was the group leader in charge.
Courageous – we worked independently and cooperatively and explored different machinery while making the fence.
Balanced – we got to know our strength and weakness of the team members and hence we distributed our work accordingly.

Overall, the trip was amazing, I got to learn many things which were new to me like how to make metal covers, doing welding etc. I was really satisfied with helping the lion so that they don’t get endangered since I am an animal lover. We at last definitely got success in making the metal covers. 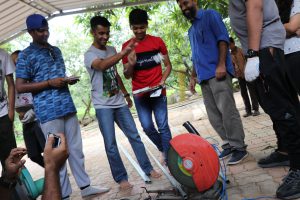 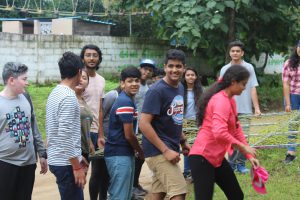 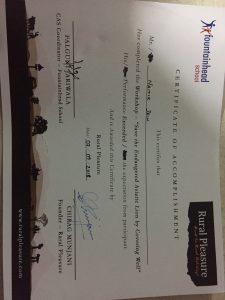