Every year our school organizes an inter-house drama competition. In that competition, I participated in the solo category and decided to perform a monologue. I have always been interested in the drama so I chose this activity. I chose a monologue from Romeo and Juliet by Shakespeare. I have always done serious and comic roles which is why I wanted to explore a new genre which was romance so I chose this monologue. I had 2 goals in my mind for this activity: win the competition and explore a new role and do justice to it. After deciding the goals and script I directed my act with some help from my teacher and practised it for a month. Finally, on the day of the performance, I performed and stood 2nd.

LO1: Identify own strengths and develop areas of growth.

For this activity, I identified my strength and weaknesses because it was a competition and I had to come over my weaknesses to give a performance. I realized that expressions and voice modulation are my strengths and memorizing the script is a weakness. I felt a need to overcome this weakness because I had to give a great performance so I spent more time on memorizing the script compared to usual. It is very important to know my strengths to gain confidence and at the same time, it is equally important to know my weakness so that I can work on it. After working on my weakness with determination I still faced it while performing but I did not show the audience that I was forgetting my lines. I felt good about that and because of this, I was able to pull off a good show.

LO3: Demonstrate how to initiate and plan a CAS experience.

I organized myself to prepare for this performance. I decided to give at least 45 minutes a day to memorize the script and practice it for a month. Usually while preparing or a drama performance I am not organized. I prepare myself in the last moment and perform but this time I did not do that. Planning was easy but when it came to actually implement the plan of practising daily it became very difficult. I learnt that if I actually practised well before the performance I was more confident and the performance also got better so I will plan my practice and composition before my future performances.

LO4 : Show commitment to and perseverance in CAS experience.

Performing a different kind of monologue was a pretty difficult thing to do. I had never explored the genre of romance so it was difficult for me to get in the character and understand the character. A lot of times I performed in front of my friends and got the comments that the act was not soulful. I realized it could only become soulful if I show the exact emotion the characters felt. A commitment to practising it on a daily basis was required to make my act a good one. Fulfilling this commitment was a problem due to time constraints. I usually show perseverance by not giving up easily and that is what leads me to success in my work so it is very important to show perseverance.

I developed the learner profiles, Thinker and Inquirer. I had to Inquire about the character to people who had read the play and I also had to research about it. I also became a Thinker by figuring out what are the exact actions and expressions I had to show. I achieved a partial success as I stood second. It made me feel a little less satisfied because I feel I could have done better but I learnt from my mistakes and I will try not to repeat my mistakes the next time. 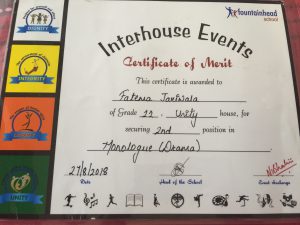